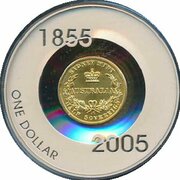 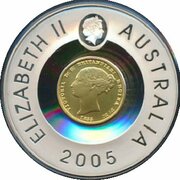 150th Anniversary of the Sydney Mint

Replica of Sydney Mint Half Sovereign set between dates 1855 & 2005

Released by the RAM in 2005 to commemorate 150 years since the Half Sovereign was issued by the Sydney Mint. The coin was released in a capsule in a plush case with limited edition certificate.

In keeping with the original coin, the 2005 Subscription coin flips on the horizontal axis (coin orientation). 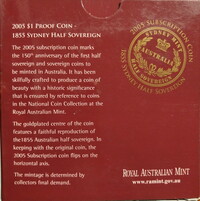 Bullion value: 50.19 USD Search tips
This value is given for information purpose only. It is based on a price of silver at 831 USD/kg. Numista does not buy or sell coins or metal.