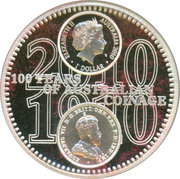 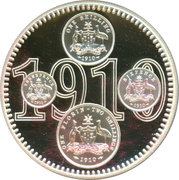 Ian Rank-Broadley FRBS is a British sculptor who has produced many acclaimed works, among which are several designs for British coinage.
William Henry James Blakemore (1871, in West Midlands Birmingham, England – 1945) was an English engraver, and medallist at the Royal Mint London. During his long career with the Royal Mint William Blakemore was the craftsman for the engraving of master dies for the Royal Mint London, and other Royal Mint branches, like the Royal Canadian Mint. He also engraved the designs for the first Australian coins of 1910.

Australia's 1910 first four coin designs: the threepence, the sixpence, the shilling and the florin

Released by the RAM in 2010 this proof coin commemorated the Centenary of Australian currency first issued in 1910. The coin was released in a capsule in a plush case with limited edition certificate.

Bullion value: 25.68 USD Search tips
This value is given for information purpose only. It is based on a price of silver at 826 USD/kg. Numista does not buy or sell coins or metal.