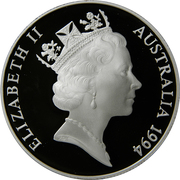 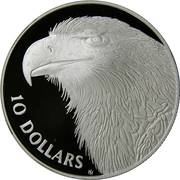 The Wedge-tailed Eagle is often seen in pairs soaring high on motionless wings. When it sights its prey - such as rabbits, carrion, marsupials, and birds - it attacks with an amazing burst of speed. It builds a very large nest (sometimes measuring two and a half metres across) high in an isolated tree so the sitting bird has a clear view. The fourth largest eagle in the world, the Wedge-tail gracefully represents Australia's harsh and powerful beauty.

Bullion value: 33.25 USD Search tips
This value is given for information purpose only. It is based on a price of silver at 899 USD/kg. Numista does not buy or sell coins or metal.