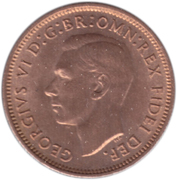 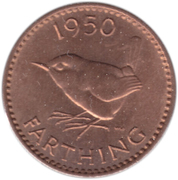 Translation: George the Sixth by the Grace of God King of all the Britains Defender of the Faith

Eurasian wren left (Troglodytes troglodytes), date above and denomination below (from the Greek 'troglodytes' meaning cave-dweller).

The original weight of these pieces was 43.75 grains or one tenth ounce avoirdupois.