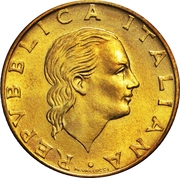 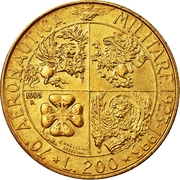 Quartered circle with above a turreted eagle (symbol of the military pilots) containing the badges of the first four squadrons established during the World War I. The chimera of the X Farman Squadron; the rampant griffin of the 91st Fighter Squadron; the four-leaf clover of the 10th Caproni Bombing Squadron and the Lion of Saint Mark of the 87th Airplane Squadron. Inside the last quadrant, together with the badge are the date, the mint mark and the name of the authors. Outside the circle, in legend the value.