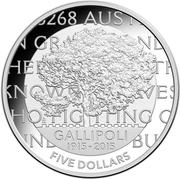 Centenary of the Gallipoli Landing

An image of a tree inspired by the Lone Pine Cemetery, on the site where some of the most intense battles of the First World War were fought

Lettering:
(Lettering across the face of the design and...)
GALLIPOLI
1915-2015
FIVE DOLLARS

Issued as a one coin part of a four coin set - the collaboration of four international mints: this $5 coin from the Royal Australian Mint, a NZ$1 coin by New Zealand Post, both struck in 999 fine silver; a 925 sterling silver 20 Lira coin from the Turkish Mint, Darphane, and a 925 sterling silver £5 coin from The Royal Mint.
The set had an issue limit of 3000 sets, however each coin of the set had different maximum mintage figures.

Bullion value: 25.45 USD Search tips
This value is given for information purpose only. It is based on a price of silver at 899 USD/kg. Numista does not buy or sell coins or metal.