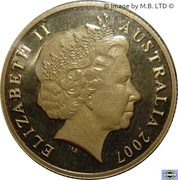 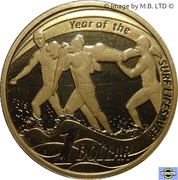 Four Lifesavers carrying a person from the surf.

Lettering:
Year of the SURF LIFESAVER
I DOLLAR

The Royal Australian Mint released this NCLT $1 Proof aluminium-bronze coin to commemorate 100 years of the Surf Lifesaving movement in Australia. This coin was only available in the 2007 Proof Year set.

A complementary 20 cent coin that commemorated the same event was also released but it was issued in the UNC Year set, Special WMF UNC Set & an Australia Post PNC, not in the Year Proof Set.

Neither of the coins were issued into circulation.

A NCLT Silver (.999) proof version of this coin was included in the 2007 Fine Silver Proof Set.

The modern Australian life saving movement began in 1907 when the NSW Surf Bathing Association was founded. Today, generations of Surf Livesavers, both volunteers and paid clubs, watch over our social activities on Australia's beaches keeping the community safe in the water. The surf lifesaver has become a symbol of Australia's identity.