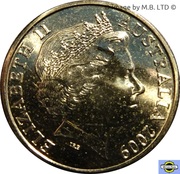 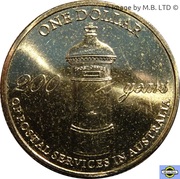 Lettering:
ONE DOLLAR
200 YEARS OF POSTAL SERVICES IN AUSTRALIA

This 2009 NCLT one dollar coin was struck by the RAM and issued in a PNC by Australia Post.

The Year 2009 celebrated 200 years of the Australian postal service delivering letters and parcels to their destinations Australia wide. Australia's first Postmaster, Isaac Nichols, took charge of packages arriving by ship at Sydney wharves working from his home in Sydney to deliver the mail. It wasn't until the postal act of 1825 that the NSW Governor fixed postage prices appointing post masters outside Sydney allowing for a more organised postal service. Now, there are more than 16,000 post boxes on streets throughout Australia.