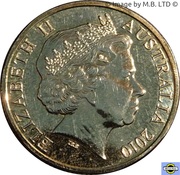 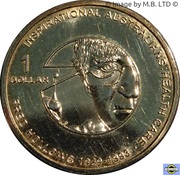 In 2008 the Royal Australian Mint introduced a new series of NCLT one dollar coins dedicated to Inspirational Australians. The third coin released and dated 2010 was issued in an unusual shaped Coincard. 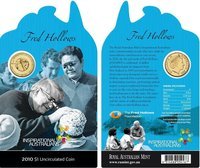 This third coin recognises and honours Fred Hollows. The reverse of the coin is inspired by a portrait of Professor Fred Hollows by photographer George Fetting. The reverse design of the coin depicts Hollows holding up an intraocular lens used on an Eritrean cataract patient.

Professor Hollows was a skilled ophthalmologist who migrated to Australia from New Zealand in 1965. He immediately set about improving aboriginal health services. Hollows expanded his reach internationally in developing countries, performing cataract surgery using an implanted intraocular lens, teaching local technicians to do the same. His name lives on in the Fred Hollows Foundation.