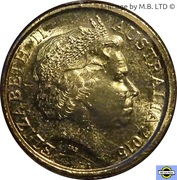 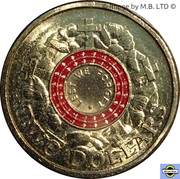 Lest We Forget - War Graves

Surrounding a red ring a depiction of five War Graves each marked by a Cross. The Crosses are interspersed by nine Poppy Flowers.

Lettering:
LEST WE FORGET
TWO DOLLARS

This coloured Aluminium-bronze "Lest We Forget" Commemorative $2 coin was released by the RAM into circulation. Sporting a symbolic red ring the coin marks the Centenary of the Gallipoli Landing in 1915. It was very hard to find in circulation. Some were being sold at vastly inflated prices initially.

The coin was also released in a coincard with a Poppy Counterstamp. 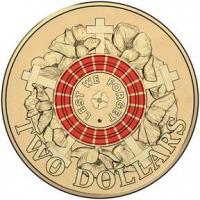