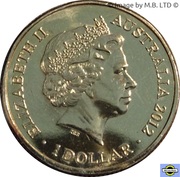 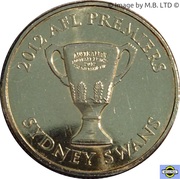 Picture of the AFL Trophy Cup

This NCLT Aluminium-bronze coin  celebrates the AFL Premiership Winning Team, Sydney Swans,  in the Australian Rules Football League for 2012. The back of the card had the autographs of each of the Sydney Swans team players and was issued by the RAM in a presentation coincard.

Not to be confused with the very similar 2012 AFL Premiers $1 coin issued by Australia Post in a PNC.
The two coins have a different reverse and obverse design even though they are commemorating the same event.