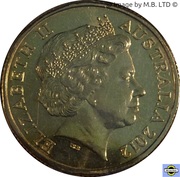 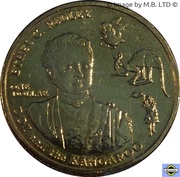 Image of Ethel C. Pedly with Dot and the Kangaroo

Lettering:
ETHEL C. PEDLY
ONE DOLLAR
DOT AND THE KANGAROO

This unique one dollar coin was only issued as part of the Annual Uncirculated Six Coin Baby Mint Set for 3 years in a row from 2012 to 2014. Each set also included a silver token that could be engraved with the baby's name. 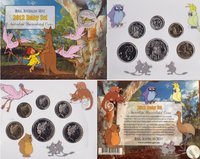 The Baby Proof Set for the same 3 years did not contain this coin, it had a standard proof MOR coin in its place.