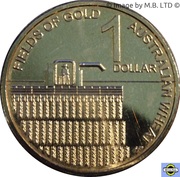 This NCLT Aluminium-bronze $1 coin was released by the RAM in two different Two Coin Sets, (UNC & Proof).
The coins were commemorating many years of Wheat production & exporting from Australia to the rest of the world.
The other coin in the set was a Copper-nickel NCLT 20 Cent coin (KM# 1625)
This was the Uncirculated Set.

Fields of golden wheat can be found across the length and breadth of Australia, and throughout its history. Since the early days of settlement when farming wheat played an important role in the self-sufficiency of the nation, the grain has grown to become synonymous with rural Australia, and we export wheat to more than 40 other countries.