Issued by the RAM in a tall Coincard in 2013 is this NCLT Pad Printed/Colourised Reverse Frosted $1 Aluminium-bronze coin. It is part of the six coin Polar Series of coins issued in individual Coincards in 2013 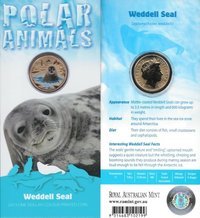 This coin was also released in a Mini PNC by Australia Post.