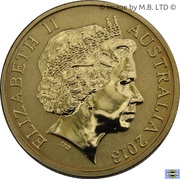 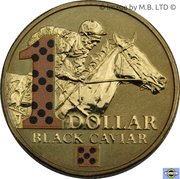 Black Caviar is a famous Australian racehorse that retired on 17th April 2013. The mare retired after having won 25 out of 25 short distance races it took part in. It was never beaten.

This pad printed coloured coin was issued by the RAM in a collector card. Depicted showing the salmon and black, jockey's silks that Black caviar raced under. 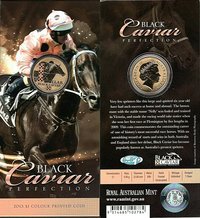 The same coin without colouring was also issued by Australia Post in a PNC, mintage unknown. (See link below)