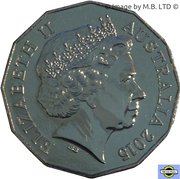 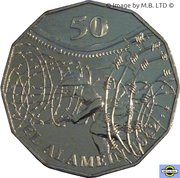 The Royal Australian Mint issued this NCLT 50 cent coin as a tribute to those who served in the early stages of the Second World War.  Australian and Allied forces faced an uphill battle against the German and Italian Axis forces. From their North African base at El Alamein, Axis forces sought to seize control of the Suez Canal and the oilfields of the Middle East. They encountered strong resistance from the Australians.
This coin is part of the "Australians at War" 18 coin series being issued individually.  Six coins were issued in 2014, Six in 2015 and the final Six in 2016.