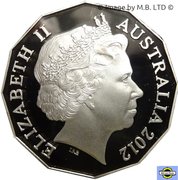 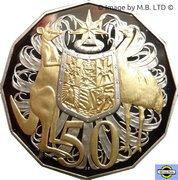 Australia coat of arms (the escutcheon is carried by a red kangaroo (Macropus rufus) and an Emu (Dromaius novaehollandiae)) and the numeral "50".
Kangaroo, Emu, Shield , 7 pointed Star & 50 are Gold Plated

The Royal Australian Mint (RAM) issued this partly Gold Plated version of the standard 12 sided 50 cent coin in the Proof Set of 2012.