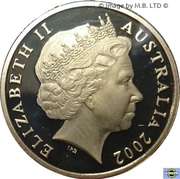 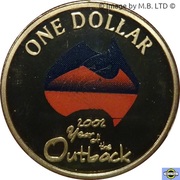 Depiction of the shape of Australia in Red and Blue with the Southern Cross Stars superimposed.

Lettering:
ONE DOLLAR
2002
Year of the Outback

The Royal Australian Mint released this aluminium-bronze, pad printed coloured NCLT Proof coin in the 2002 Year Proof Set and Koala Baby Proof Set. This coin was only available in those two sets. 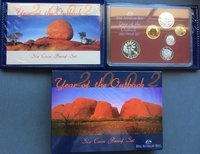 The 2002 year was designated as the "Year of the Outback" which celebrated that part of Australia that is so internationally famous (but actually lived in by very few Australians). There were more than 7000 celebratory activities held Australia wide during the year.

In addition a Fine Silver (.999) NCLT Proof version was released in a capsule in a plush square box.