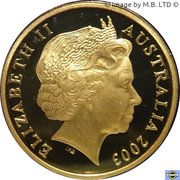 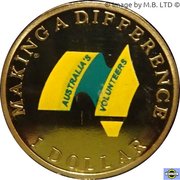 The Royal Australian Mint released this aluminium-bronze, pad printed coloured NCLT Proof coin in the 2003 Year Proof Set and Koala Baby Proof Set. This coin was only available in those two sets. 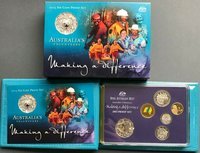 The year 2003 saw the Royal Australian Mint consult with the peak volunteering body, Volunteers Australia to design a set of coins celebrating the contribution of more than 4 million volunteers.

A Copper-nickel 20 cent & 50 cent as well as the Aluminium-bronze $1 coin were designed and minted with words, "Australia's Volunteers : Making a Difference".  All 3 commemorative coins incorporated designs to honour Australia's volunteers. All three coins were released into general circulation and were available in the usual year sets.

A Fine Silver (.999) Proof version of the coin was also released in limited numbers in a capsule inside a plush square case.