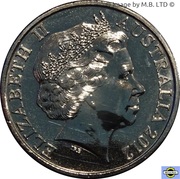 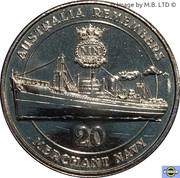 This NCLT 20 cent coin was released by the RAM in a large coincard. It is the fourth coin in a series of  seven "Australia Remembers" 20 cent coins.

This coin commemorates the Merchant Mariners who are a country's lifeline, transporting essential supplies through wartime and peace. During WWII, the Merchant Navy suffered a higher rate of casualties than any of the regular armed forces.