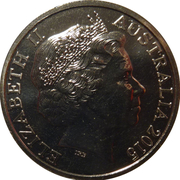 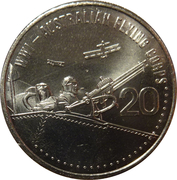 Two Australian Pilots sitting in the cockpit of an aeroplane with machine gun at the ready. In the background 2 biplanes can be seen

The Royal Australian Mint in conjunction with some Australian Newspapers released this coin as part of a 14 coin set. To get a coin you had to obtain a token from the newspaper and redeem it at a cost of $3.50. Different tokens were published each day for 2 weeks (hence 14 coins). The coins are commemorating events of World War 1 that Australians were involved in. The series is called "Anzacs Remembered".

This 20 Cent coin acknowledges the brave men of the Australian Flying Corps.

A special $1 coin was also produced as part of the set which is very difficult to obtain due to very low mintage.

A member of this site wants to exchange this coin: hxie