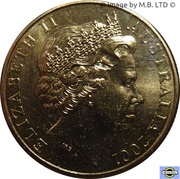 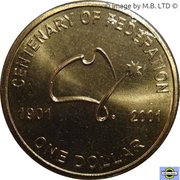 Lettering:
CENTENARY OF FEDERATION
1901 2001
ONE DOLLAR

This coin was released by the RAM to Commemorate the Centenary of the Federation of Australia in 1901. Prior to 1901 Australia was just a collection of separate Colonies of the British Crown. This coin was issued into general circulation and included in the annual "UNC Year Mint Set" and "UNC Baby Koala Set". It was also issued in Nine different "Three Coin UNC Sets", (One for each State & Territory of Australia), and a "Limited Edition 20 coin UNC Folder". 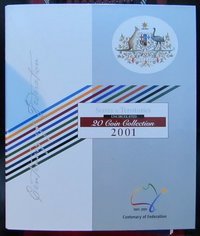 The RAM released many other coins into circulation commemorating the Australian Centenary of Federation. Ten fifty cent coins and nine twenty cent coins (Included in the above sets) as well as this one dollar coin.
Variations of this $1 coin exist, obverse engravers initials "IRB" joined and "IRB" spaced 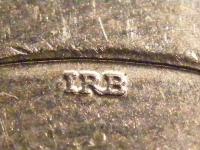 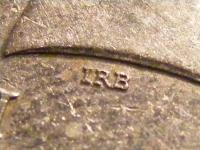 A pad printed colourised version of this coin was included in the 2001 "Proof Year" and "Proof Baby Koala Set". A "Limited Edition 20 Coin Proof Set" of all Federation coins was also released as well as nine individual "Three Coin Proof Sets" that included the coloured $1. The Proof coin had the map shape of Australia pad printed with the Australia map in Blue and the star Red. See link below.