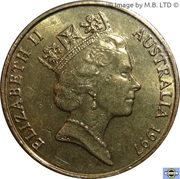 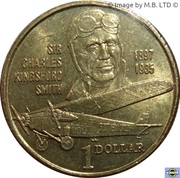 This commemorative aluminum-bronze coin was issued into circulation by the Royal Australian Mint (RAM) and was also issued in the various annual 1997 Proof, UNC Mint & Baby Sets. This is the Mint Set. 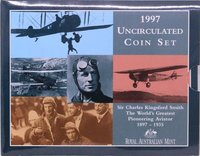 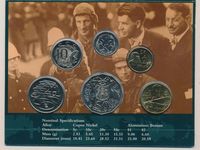 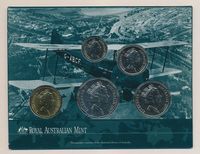 It was also issued in a Dual Coincard Set with the "Small Head" Kingsford-Smith NCLT coin as shown here. 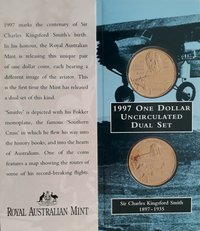 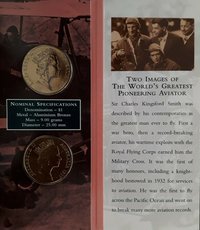 Born in 1897 Sir Charles Kingsford-Smith was an early Australian aviation pioneer. He is best known in Australia for making the first Pacific crossing from Australia to the USA, setting a speed record from Australia to London of 10.5 days, and for disappearing while attempting to set yet more records. He is an iconic figure in Australian history and his blue Fokker Tri-Motor aircraft, the Southern Cross, is equally well known in popular culture.

The different "Small Head" Charles Kingsford Smith commemorative coin was available at various Royal Shows in Australian capital cities during the year from the mobile mint your own press. See link.

Fine Silver (.999) versions of both coins were also released by the RAM.