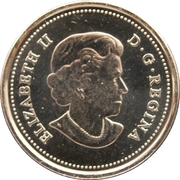 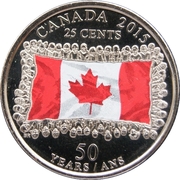 50th Anniversary of the Canadian Flag

This coin features a design of fifty children who each represent one of the flag's 50 years, as well as Canada's future. The words "50 years/ans" appear at the bottom centre. The design was created by artist Bonnie Ross from Nova Scotia.

This coin was released in 2015 to commemorate the 50th anniversary of the Canadian flag. It was available for purchase from the RCM's online store at face value. It was very popular and sold out within a couple of weeks.

Because of the high demand for this coin, it is hard to find in general circulation.