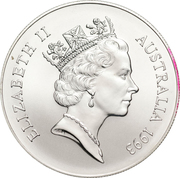 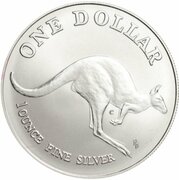 This is a Coin Master from the Royal Austral Mint's Master Collection.
Two of these coins were sold on 26/05/2015 at Downies Australian coin action sale 319A for $50 AUD each.
The coin pictured latter sold on Ebay.com for $100 AUD on the 24/06/2015.
Only two of these coin masters exist.
One of the coin masters were for the "Standard Issue" (pictured - milled edge) and the other one for the "Sydney Coin Fair Issue" (interrupted milled edge).

The two coins are marked with a red marker on the edge to show that they were a part of the Royal Australian Mint's "Master  Collection".

Bullion value: 28.15 USD Search tips
This value is given for information purpose only. It is based on a price of silver at 887 USD/kg. Numista does not buy or sell coins or metal.