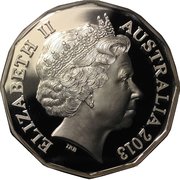 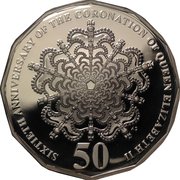 Lettering:
SIXTIETH ANNIVERSARY OF THE CORONATION OF QUEEN ELIZABETH II
50

This Fine Silver (.999) NCLT Proof 50 cent coin was released by the Royal Australian Mint to celebrate the 60 years since Queen Elizabeth II was crowned at her Coronation ceremony in 1953. It was released in a capsule in a plush case. 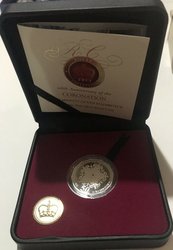 More than a year after her accession in 1952, Queen Elizabeth II was crowned in Westminster Abby. The Royal Australian Mint's commemorative 50c coin honours the 60th anniversary of that momentous event, which begun one of the longest reigns in British history.

A Copper-nickel version of this coin was released in a coincard.

Bullion value: 14.22 USD Search tips
This value is given for information purpose only. It is based on a price of silver at 781 USD/kg. Numista does not buy or sell coins or metal.