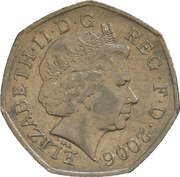 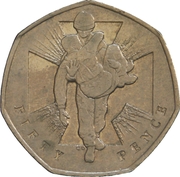 150th anniversary of the institution of the Victoria Cross

Soldier carrying a wounded comrade against a silhouette of the Victoria Cross, denomination below.

As well as being for circulation, the 2006 strike was issued as part of the Annual Coin Sets for 2006, in both Brilliant Uncirculated & Proof versions.

The 2009 Proof strike was issued in sets to commemorate the 40th anniversary of the 50 pence denomination; issue limit: 5,000

The design was re-used in the 2019 military set to commemorate the 50th anniversary of the 50 pence denomination.
(former Spink ref. 4618)