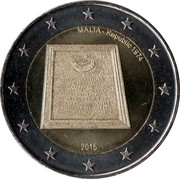 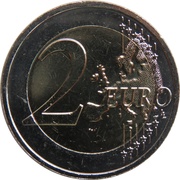 The coin is the last in a series of five commemorating Maltese constitutional milestones. Malta was declared a republic on 13 December 1974 following constitutional changes which were agreed upon by a great majority in Malta’s Parliament. The design reproduces a marble tablet affixed to the façade of the Presidential Palace in Valletta to mark Malta’s change from a monarchy to a republic. At the top right, in semi-circle, the inscription ‘MALTA — Republic 1974’. At the bottom, the year ‘2015’. The coin’s outer ring bears the 12 stars of the European Union.