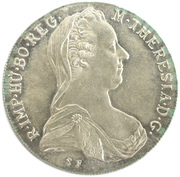 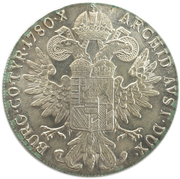 Translation:
Maria-Theresia, by the Grace of God, Roman Empress, Queen of Hungary and Bohemia

Translation: Archduchess of Austria, duchess of Burgundy, comtess of Tyrol

The Maria Theresa Thaler was originally struck in Austria between 1740 and 1780. It was the circulating currency of the Holy Roman Empire and its dominions and it was one of the most important trade coins in Europe and the world. Since the death of Maria Theresa in 1780, the coin has always been dated 1780. It has been continuously minted in various mints around the world: Birmingham, Bombay, Brussels, London, Paris, Rome, and Utrecht, in addition to the Habsburg mints in Günzburg, Hall, Karlsburg, Kremnica, Milan, Prague, and Vienna. It is estimated that until 2000, 389 million pieces were minted. As of 2019, it is still sold by the Vienna mint https://www.muenzeoesterreich.at/produkte/maria-theresien-taler 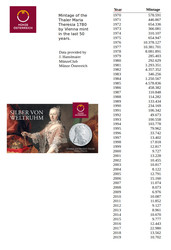 There are over 150 different major variants, and virtually all dies produced before 1850 had minor differences. Subtle differences in design, style, and lettering allow determining at least partly the date and the mint. Some variations are very rare, with 10 pieces or less being known to exist.

Along with the Spanish 8 Reales coin, it was the basis of the silver dollar which was adopted by the then-fledgling United States under the Mint Act of 1792. The word "dollar" is derived from the German word "Thaler/Taler". Also known as the Levant dollar, it also circulated as trade coinage in the Arab world (especially in Saudi Arabia, the Yemen, Syria, Muscat, and Oman), in Africa (especially in Ethiopia, Somalia, Kenya, Tanzania, and Mozambique), in India and Indonesia. It remains in circulation to this day in conflict areas in the Middle East and Africa.

Rome Mint Variant:
As a result of the Royal Legislative Decree No. 1371 of 1936, the Italian government regulated the circulation of the Conventionsthaler of Maria Theresa in the territories of Italian East Africa, providing that these coins, traditionally used as commodity-currency for exchanges, could be changed by the Bank of Italy, without time limits, at an Italian lira rate to be established periodically by the governors.

After the failure of the negotiations with Austria, regarding the possibility of reconstituting the thalers of Maria Theresa, conducted in various forms after the First World War, and given the Italian needs following the failure of the issue of the Eritrean Thaler (https://en.numista.com/catalogue/pieces19047.html) before, and after the Thaler of Italy (https://en.numista.com/catalogue/pieces19516.html), afterward, the Italian government resumed negotiations with the Austrian government directly and managed to conclude an agreement, signed on 9 July 1935, reflecting the sale of the exclusive right to the Italian government for 25 years to strike and put Maria Theresa's thalers into circulation. In execution of this agreement, the Mint of Vienna delivered to the Italian mint the dies reproducing this coin. Thus the Royal Italian mint was able to meet the needs of the Italian colonial campaign in East Africa from the beginning, coining, from August 1935 to June 30, 1939, at the rate of 100,000 pieces per day, these coins on behalf of the government of East Africa (4,300,000 pieces), the Treasury (14,200,000 pieces), the Banco di Roma (745,409 pieces) and the Bank of Italy (201,320 pieces). The metal obtained from previous demonetizations was used for these coinages [MdF 1940, pp. 64-65].

The dies, thanks to which the coins of Maria Theresa's thalers minted in Rome were obtained, were returned to Austria in 1961, after the 25 years of the transfer agreement had expired [Simonetti III, p. 290, note 314].

These Maria Theresa thalers coined in Rome are almost identical both to those coined in Vienna from 1932 to 1935 and to those coined in London in 1936, differentiating themselves from the latter only for the silver fineness contained in them, equal to 835 thousandths against 833.33 thousandths of the Austrian and British ones. In this regard, Girola [2010, p. 335] informs us that "The preference for the 835 titles was given because all the Italian fractional silver coin made after the unification of Italy was coined for the 835 title and therefore silver stocks with that title were readily available."

These coins, in the reverse after the date, present the symbol X which recalls the cross of Saint Andrea. It is the identifying sign of the Conventionsthaler of Maria Theresa and was stamped on the coins to commemorate the monetary reform of the "Monetary Foot of 20 florins", sanctioned by the 1753 agreement with the Duchy of Bavaria. Based on this agreement it was decided that from a mark of Cologne, 233.8555 grams of fine silver, coins worth 20 florins should be obtained. So, a florin, whatever its title, had to contain 11.69277 grams (233.8555: 20 = 11.69277) of fine silver. For this reason, these coins took the name of "thalers of convention" (Konventionstaler) [Gigante 2016, p. 180].

Bullion value: 21.31 USD Search tips
This value is given for information purpose only. It is based on a price of silver at 912 USD/kg. Numista does not buy or sell coins or metal.