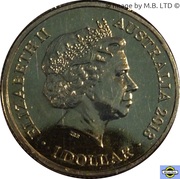 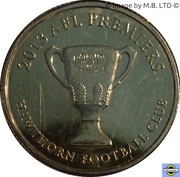 Image of the AFL Trophy Cup

This NCLT Aluminium-bronze coin  celebrates the AFL Premiership Winning Team, Hawthorn,  in the Australian Rules Football League for 2013. The back of the coincard had the autographs of each of the Hawthorn team players and was issued by the RAM in a presentation card. 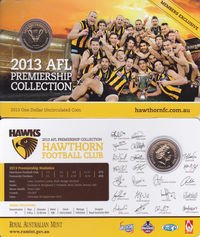 The coin was also issued in a PNC by Australia Post. 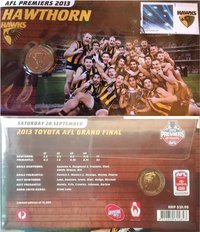 Hawthorn also won the trophy in 2014 and another very similar but different coin was produced that year too.
The two coins have different reverses, but the only difference is the Year of the Premiership Win.