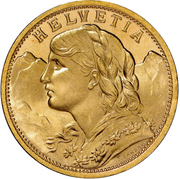 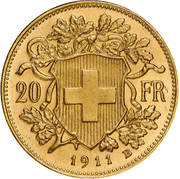 Bust of a young woman from Oberhasli facing left, with tresses and a garland of edelweiss. Mountains in the background.

Fritz Ulysse Landry, born in Le Locle on 26 September 1842 and died in Neuchâtel on 7 January 1927, is a Swiss medalist and sculptor. He is best known for being the author of the engraving that adorns the Swiss Vreneli gold coins.

Coat of arms of Switzerland. Oak (Quercus robur) branch with acorns and ribbons behind.

Fritz Ulysse Landry, born in Le Locle on 26 September 1842 and died in Neuchâtel on 7 January 1927, is a Swiss medalist and sculptor. He is best known for being the author of the engraving that adorns the Swiss Vreneli gold coins.

Embossed pattern with 22 stars in three groups, two of seven and one of eight stars.

Swiss gold coins were never officially demonetized, but in 1936, the franc was devalued against gold, so their bullion value became higher than their legal value. In 1944, they became subject to turnover tax, which was a de facto demonetization.

In 1895, the Federal Council decided to adopt a new design for the 20 franc gold coin. From a total of 21 suggestions, a depiction of Helvetia by Fritz Ulysse Landry (1842–1927, Neuchâtel) won second place. His Helvetia figure was criticized as too young and romantic, and the alpine panorama as too intrusive. Landry revisited his design and the revised design was chosen for the coin.

These coins are colloquially referred to as Goldvreneli. The name is a Swiss German affectionate diminutive of the female given name "Verena". This name, in its diminutive form also used as a pars pro toto for female youths, is popular in Switzerland.

Varieties of this type:

• In 1897, an additional 29 coins were minted of Gondo gold from the former gold mine in Gondo, Canton Valais. The alloy of these coins contains not only copper but also silver, which results in a lighter color. In addition, a small cross is punched in the middle of the Swiss cross on these coins:
⸰ Example of this variety:

Errors of this type:

Bullion value: USD 333.97 Search tips
This value is given for information purpose only. It is based on a price of gold at 57 532 USD/kg. Numista does not buy or sell coins or metal.