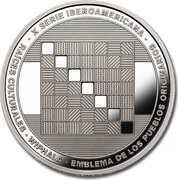 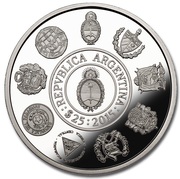 It translates into a geometric, symmetrical and balanced composition. In its central imprint it presents the Wiphala and the Argentine National Pavilion, symbolizing the coexistence and the respect to the first settlers, and the principle of equality. They are surrounded by the inscriptions X SERIES IBEROAMERICANA in the upper arch, and RAÍCES CULTURALES - WIPHALA - EMBLEMA DE LOS PUEBLOS ORIGINARIOS in the lower arch. The Wiphala consists of 49 squares, 7 per side, and its chromatic palette alludes to the rainbow (yellow, orange, red, violet, blue, green and white). For each color, represented by graphs that are then translated into textures on the metal, there are 7 squares.

Design common to all the currencies that integrate these series, the central Argentine National Coat of Arms and inscriptions "REPVBLICA ARGENTINA", the face value "$ 25" and the year of coinage "2015" are distinguished in a central position. Surrounding our emblem, the shields of all participating countries.

The X Ibero-American Series of Commemorative Coins, whose motto is "Cultural Roots", is the result of a collective project that began in 1992 and our country has always participated. This time also involved: Cuba, Ecuador, Spain, Guatemala, Nicaragua, Paraguay, Peru and Portugal.

The design of this piece, realized in the Management of Strategic Planning of Treasure of this Institution, refers to the emblem of the native peoples and cone of the ethnic and cultural diversity, the Wiphala. Its square structure, unlike the western flags that are rectangular, evokes: organization, harmony, solidarity, unity, equality, justice, integration, inclusion.

Bullion value: 10.75 USD Search tips
This value is given for information purpose only. It is based on a price of silver at 861 USD/kg. Numista does not buy or sell coins or metal.