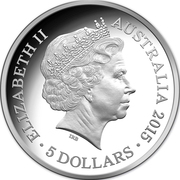 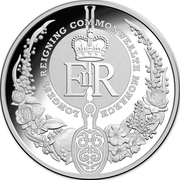 Her Majesty’s royal insignia, the Coronation Spoon and an enchanting border consisting of some of the coronation oil’s ingredients alongside Australia’s golden wattle

A celebration of Her Majesty’s milestone as the Commonwealth’s longest-reigning monarch, this one ounce fine silver Coin was struck by the Royal Australian Mint’s made from high quality proof standard. Coin’s reverse features Her Majesty’s royal insignia, the Coronation Spoon and an enchanting border consisting of some of the coronation oil’s ingredients alongside Australia’s golden wattle.  A symbolic testimony to the enduring bond between Australia and the United Kingdom. 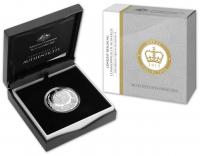 The coin was also issued in a Three Mint Joint set. The Royal Mint, The Royal Australian Mint and the Royal Canadian Mint produced this beautiful Fine Silver set in a plush wooden box with certificate. The UK coin was a £5 Crown and the Canadian coin was a $20 colourised coin. See links. 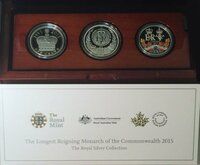 Bullion value: 24.90 USD Search tips
This value is given for information purpose only. It is based on a price of silver at 879 USD/kg. Numista does not buy or sell coins or metal.