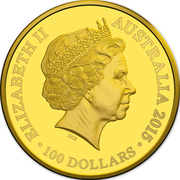 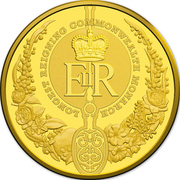 Issued by the Royal Australian Mint to commemorate the Longest Reign of any British Monarch.

After 63 years from the sacred ritual being performed Her Majesty remains a beloved figure. In an ever-changing world, she is the personification of tradition, stability and grace. On 9 September 2015, Australia will be joining its fellow Commonwealth nations to mark her outstanding achievement of being the longest-reigning monarch in Commonwealth History. A celebration of Her Majesty’s milestone a 3 coin Gold Collection will be struck by the Royal Australian Mint. Royal Mint and Royal Canadian Mint made to high quality proof standard. Coin’s reverse features Her Majesty’s royal insignia, the Coronation Spoon and an enchanting border consisting of some of the coronation oil’s ingredients alongside Australia’s golden wattle.

Bullion value: 1,942.12 USD Search tips
This value is given for information purpose only. It is based on a price of gold at 62,510 USD/kg. Numista does not buy or sell coins or metal.