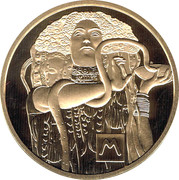 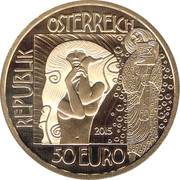 Series: Klimt and his Women

Detail from Klimt's painting "Medicine" as Hygeia, daughter of the Greek god of medicine, with Aesculapian snake wound around her arm and the cup of Lethe in her hand

Detail from Klimt's painting Judisprudence, in form of the Eumenides, the Greek deities of vengeance. Stylised snakes accentuate Klimt's customary swirling patterns of the gorgon's hair in the rectangular centre, while to the right stands the goddess of law.

Originally painted to decorate the ceilings of the University of Vienna, Klimt's Faculty Paintings became the subject of major controversy when the critics and public alike reacted strongly to the way they broke cultural taboos and pushed the boundaries of obscenity. The original paintings could not be seen any more: On 7th of mai 1945 - one day before the victory over german fascism -  a  military unit of the Nazi Division  called ,Feldherrnhalle' took lodgings in Immendorf Castle (in which the paintings were outsourced). In order to prevent the paintings and other rich culture fell into hands of the approaching Red army , all rooms of the castle have been booby-trapped by Nazi demolition squad. So on arrival of the victorious Soviet army the castle together with the stored art treasures fell prey to the flames.

Bullion value: 588.07 USD Search tips
This value is given for information purpose only. It is based on a price of gold at 58,818 USD/kg. Numista does not buy or sell coins or metal.