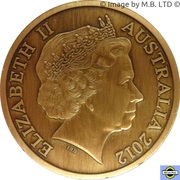 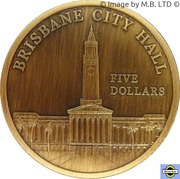 This NCLT coin was finished in Antique style. Produced by the RAM specifically for the ANDA Brisbane show in 2012. Restricted to a mintage of 2000. Each coin was issued in a numbered coincard.

At the heart of every great Australian City is the town hall. With a clock tower rising 92 metres above King George Square, the heritage listed Brisbane City Hall has presided over Queensland's capital since its official opening in 1930.