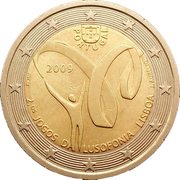 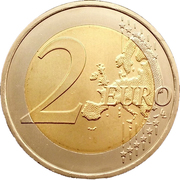 A gymnast swirling a long ribbon and the Portuguese shield at the top together with the name of the issuing country. At the bottom, the legend ‘2.os JOGOS DA LUSOFONIA LISBOA’ is inscribed between the initials ‘INCM’ on the left and the artist's name ‘J. AURÉLIO’ on the right. The year ‘2009’ appears above the gymnast. The coin's outer ring shows the 12 stars of the European Union on a background of concentric circular lines.

The coin was issued to mark the games held for Portuguese-speaking countries.