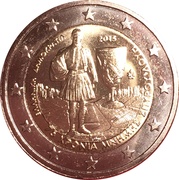 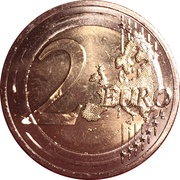 75 Years in Memoriam of Spyridon Louis

The design shows Spyros Louis and the cup that he was awarded, against the background with the Panathenaic Stadium. Inscribed along the inner edge is the country of issuance ‘ΕΛΛΗΝΙΚΗ ΔΗΜΟΚΡΑΤΙΑ’ and ‘75 ΧΡΟΝΙΑ ΜΝΗΜΗΣ ΣΠΥΡΟΥ ΛΟΥΗ’. Above the cup appears the year of issuance ‘2015’ and to the right a palmette (the mint mark of the Greek Mint). Visible at the bottom of the design is the monogram of the artist (George Stamatopoulos).

Spyros Louis (1873-1940), a water carrier from Marousi, a suburb of Athens, was the winner of the first Olympic marathon when the Olympic Games were revived in Athens in 1896. His triumphant entry into the Panathenaic Stadium was cheered by 80,000 spectators.
The coin was issued in bankrolls, in Proof quality in box with certificate of authenticity and in BU quality on a coincard blister. 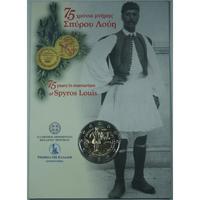 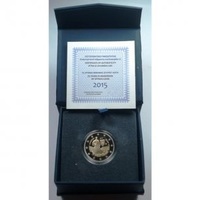