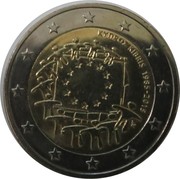 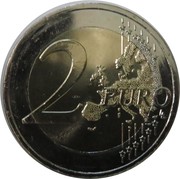 The designs show the EU flag as a symbol that unites people and cultures with shared visions and ideals for a better common future. Twelve stars that morph into human figures are embracing the birth of a new Europe. At the top right, in a semi-circle, are the issuing country and the years ‘1985-2015’. At the bottom right are the initials of the artist (Georgios Stamatopoulos). The coin’s outer ring bears the 12 stars of the European Union.

The issue consists of 350,000 coins, of which 8,000 coins outstanding (proof) state arranged in boxes and numbered with appropriate certificates, 6,000 coins brilliant uncirculated condition placed in capsules and 336,000 uncirculated coins situation in rolls of 25 pieces.