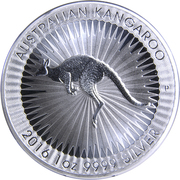 Struck by The Perth Mint from 1oz of 99.99% pure silver in bullion quality, the coin is issued as legal tender under the Australian Currency Act 1965, featuring The Perth Mint’s traditional ‘P’ mintmark.

As a Perth Mint first, the coin includes an authentication feature on the reverse. In the form of a micro-laser engraved letter ‘A’ which is within the last A of AUSTRALIA, it is detectable under a magnifying glass. The authentication feature is designed to make it significantly more difficult for the coin to be counterfeited providing peace of mind to Perth Mint customers.

Bullion value: 25.78 USD Search tips
This value is given for information purpose only. It is based on a price of silver at 829 USD/kg. Numista does not buy or sell coins or metal.