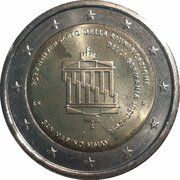 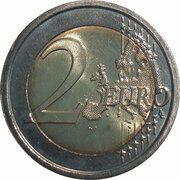 25th Anniversary of the German Reunification

The design shows the Brandenburg Gate which during the Cold War was located in East Berlin, in two representations which are intertwined like two hands, symbolizing the reunification of the two parts of Berlin. At the left the mint mark ‘R’ and the initials of the artist ‘ES’ (Erik Spiekermann). In circle around the design are the inscription ‘25° ANNIVERSARIO DELLA RIUNIFICAZIONE DELLA GERMANIA 1990-2015’ and the country and year of issuance ‘SAN MARINO MMXV’.