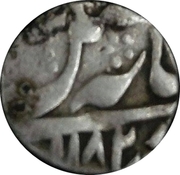 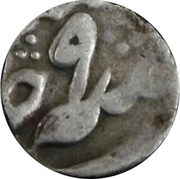 Translation: Defender of the religion of Muhammad, Shah Alam Emperor Shadow of the divine favour, put his stamp on the seven climes, AH 1182

Translation: Struck at Murshidabad in the 9th year of his reign of tranquil prosperity

- From August 1765 the control of the Mughal mints in Bengal passed to the East India Company. Thus coins from the Murshidabad, Dacca & Patna mints with Hijri (AH) and julus (RY) years 1179/7 onward are included in the British Indian series.
- The smaller denominations of this issue are all struck with flans much smaller than the dies used. As a result the Hijri date is never found on them, however the regnal year, being near the centre of the die usually is present. The coin in the image above with the complete Hijri date on flan is very rare.
- Coins  occur with the dates 1179 and 1183 AH ie. from  1765 to 1769 AD
- Murshidabad mint, star mint mark