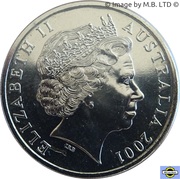 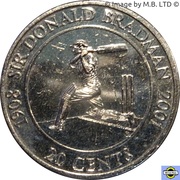 The Royal Australian Mint released this coin into general circulation in 2001 the year that Sir Donald passed away as a tribute to his life and services to Australian Cricket. Sir Donald George "Don" Bradman, AC (27 August 1908 – 25 February 2001), often referred to as "The Don", was an Australian cricketer, widely acknowledged as the greatest Test batsman of all time.

Various other higher value NCLT coins have been produced by the RAM and the Perth Mint recognising Sir Donald Bradman - See links.