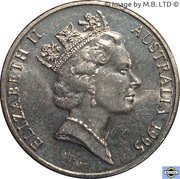 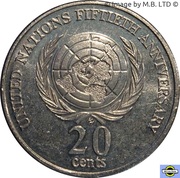 50th Anniversary of the United Nations

Symbol of the United Nations above value

1995 saw the 50th anniversary of the United Nations and to celebrate the event the Royal Australian Mint released the first commemorative Australian 20 cent coin into circulation almost 30 years since the first 20 Cent coin was issued in 1966.

In 1998 the RAM Re-issued the coin in Silver Proof finish as part of a "Masterpieces in Silver" set to commemorate 20 cent sized coins issued in Australia since 1910. Both definitive and commemorative designs were incorporated into the set.