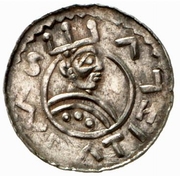 Bust of the duke facing right in a cirlce, robe stylized by 2 parallel curved lines, 3 points below.

In a circle, a Roman chapel on the right, on the left, a hand holding a flag.

Vratislaus II, second son of Bretislaus I, taken control of Duchy of Bohemia in 1061. He is known for being the very first king of Bohemia. We was active in the Investiture  contests, and as a token of gratitude, he recieved royal coronation from the hands of the Holy Roman Emperor Henry IV, although the title was not hereditary. Thus he ruled as a king from 1085 until 1092.

A member of this site wants to exchange it: MIMAEL

» Buy coins from the Royal mint of Bohemia at eBay