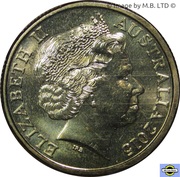 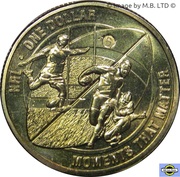 This NCLT Aluminium-bronze coin released by the RAM commemorates the 2015 NRL Telstra Premiership Season. The coin was released in a number of different versions as follows:-

Plain finish with a (S) Counterstamp issued in a large coincard as per this coin pictured above (Mintage 3,481) 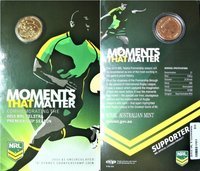 Plain finish without a Counterstamp issued in a PNC by Australia Post (Mintage 3,000) 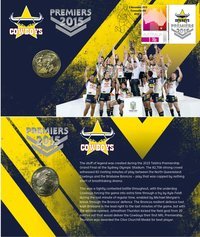 Pad Printed in the colours of the winning team North QLD Cowboys issued by ballot, in a plush square box (Mintage 500) See links

Fine Silver versions of the coin were also released in the The Ultimate Collection NRL With Silver Dollar - Sealed Lucky Dip. Versions of this coin that were released this way, (Total Mintage 5,000), were:-

The 2015 NRL Season will be remembered as one of the most exciting in the game's proud history. From the closeness of the Premiership through the passion of the international Rugby League, it was a season which captured the imagination of fans like never before. It was the "Moments That Matter" - The spectacular tries, courageous defence and the brilliant skills of Rugby League's elite stars that again highlighted why Rugby League is the Greatest Game of All.