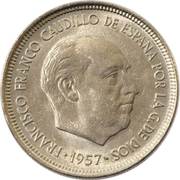 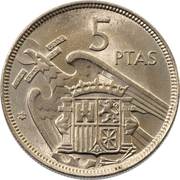 Translation:
Francisco Franco Leader of Spain by the Grace of God
1957

Mariano Benlliure (8 September 1862 – 9 November 1947) was a Spanish sculptor, who executed many public monuments and religious sculptures in Spain, working in a heroic realist style.

Translation:
5 Pesetas
One, Great and Free
Further beyond
59 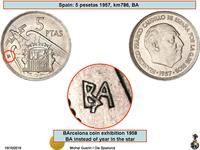