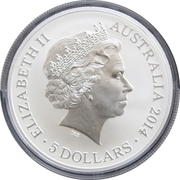 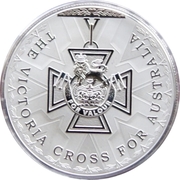 The Maltese Cross, with a lion guardant above a crown symbolizing the British Royal Family.

Lettering:
THE VICTORIA CROSS FOR AUSTRALIA
FOR VALOUR

A part of the ANZAC Centenary Coin program of Royal Australian Mint.

An Antiqued Proof Copper coin with a similar reverse design was also released at the same time as this Fine Silver coin. - See Link

Bullion value: 23.53 USD Search tips
This value is given for information purpose only. It is based on a price of silver at 831 USD/kg. Numista does not buy or sell coins or metal.