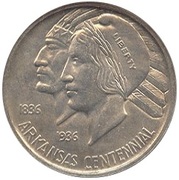 100th Anniversary of the Statehood of Arkansas

Liberty head and head of an Indian looking to the left.

Edward Everett Burr (born 1895, in Ohio) studied at the Art Institute of Chicago. He worked in Chicago as a sculptor, painter, and architectural renderer. He designed the Arkansas centennial half-dollar in 1936.

Eagle with the Arkansas flag in the background.

Edward Everett Burr (born 1895, in Ohio) studied at the Art Institute of Chicago. He worked in Chicago as a sculptor, painter, and architectural renderer. He designed the Arkansas centennial half-dollar in 1936.

Commemorative coins were authorized to celebrate the 100th anniversary of the admission of Arkansas into the Union. The Arkansas Centennial Half Dollars ended up being issued during five separate years, across three different mints. The coins became controversial due to the stream of variations created specifically to market to collectors, as well as the escalating issue prices as mintage for later issues became smaller.

The obverse design features the head of Liberty and a Native American in headdress. The centennial dates “1836” and “1936” appear, along with the inscription “Arkansas Centennial” below and “Liberty” on Liberty’s cap. Although this is now considered to be the obverse of the coin, there was initially some confusion and US Mint records and some references refer to this side as the reverse. In 1936, a new design was issued for this side of the coin, featuring a Senator who was living at the time of issue. The 1936 Robinson-Arkansas Half Dollar is considered a separate issue by most collectors.

At the onset, the Arkansas Half Dollar was struck in a modest quantity of 13,012 pieces at the Philadelphia Mint with an additional 5,505 from Denver and 5,506 from San Francisco. The Philadelphia issues were sold at an issue price of $1 each, while the mint marked coins were purchased in a bulk transaction by a coin dealer and subsequently sold for $2.75 each. This initial situation was a taste of things to come.

From the maximum authorized mintage of 500,000 coins, eventually there were 85,302 of the Arkansas Centennial Half Dollars sold across all years and mints. The centennial had been celebrated for a five year period including one year prior to the actual anniversary date.

Members from this site want to exchange it: aporellos, eljunquito52