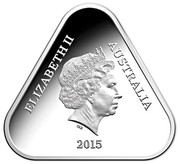 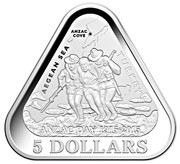 2 soldiers help carrying another soldier on background of coast of Turkey and the Aegean sea, lettering below

2nd coin in a 5 year series of the ANZAC Centenary program.

Bullion value: 13.17 USD Search tips
This value is given for information purpose only. It is based on a price of silver at 593 USD/kg. Numista does not buy or sell coins or metal.